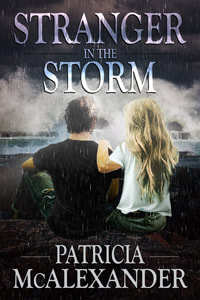 About Stranger in the Storm

A storm and a stranger may change her life.

After she discovers the abusive side of his personality, Janet Mitchell leaves the professor who swept her off her feet. Will she discover the same darkness in Wes, the handsome young man who rescues her during a hurricane?
​
Years before, Wes Corbett vowed not to get romantically involved again, fearing anyone close to him might be harmed by his brother William, a born criminal. Now as he weathers the storm with Janet, their mutual attraction becomes clear. Can he keep that vow--even though he knows William is on the loose and may be headed directly for them?

A wave of horror passed over her. It was true. Wes was the escaped convict. He had reunited with Richard Sturgess, the other convict. How he had fooled her! He was as good a performer as Jack, acting so convincingly to get what he wanted—in this case, shelter and food— then her father’s tools to free his truck.
Richard said to Wes, “Did you get the key?”
“Yes.” Wes held it up, then unlocked the door and motioned them inside. He looked at the pile of clothes and the wet mattress on the floor. “What a mess.”
“I need to get dressed,” she said.
“Sure, you can get dressed. But you aren’t getting out of my sight.” Wes noted her jeans, shirt, and underwear on the couch. “Here you go.” He tossed the items one by one to her, dangling her bra for longer than was necessary.
Anger boiled up in her. Snatching each item, Janet saw the blanket he had used on the couch the night before. She grabbed it and wrapped it about her like a burka. Then she pulled off her bathing suit and, rather awkwardly, dressed inside the blanket.
Wes watched her with mocking amusement. Finished, she threw the blanket aside. “Clever girl, aren’t you?” said Wes. “Now, how about getting me some dry clothes and fixing us something to eat?”


From Amazon reviews of Stranger in the Storm:

“Stranger in the Storm is a mix of romance, thriller, and psychology (managing violence). Patricia McAlexander takes the romance genre and updates it for us.”

“Stranger in the Storm keeps the reader riveted from start to finish.”

“I sat on my front deck happily lost in Stranger in the Storm to the last sentence.”