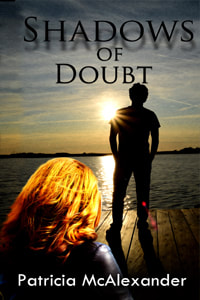 About Shadows of Doubt

In spite of warnings about him, should she take a chance?

Former grade school bully and, later, amateur drug dealer Jeff Hudson turns his life around and is pursuing a degree in agriculture.  His future, as well as a budding relationship with fellow student Sandy Harris, is threatened when a former dealer threatens to expose Jeff’s past to university authorities if he doesn’t rejoin the ring.

Realizing that Jeff is no longer an angry, misunderstood boy, Sandy must take a stand against her family and friends who swear he is no good and will only cause her unhappiness.

Together, can they escape the past in order to forge a future?
FROM GOODREADS REVIEWS

[Protagonist Sandy Harris] realizes that like Elizabeth Bennet, the protagonist of Jane Austen’s Pride and Prejudice, she is learning that appearances can be deceptive and that one’s perceptions of reality can be distorted by one’s assumptions. . . . Shadows of Doubt is more than just a suspenseful page-turner—although it is that too; it is also a beautifully written, psychologically complex novel, at once chilling and literary.

Like any good mystery writer,  McAlexander plays fair with the reader. She plants clues throughout the story that allow the reader to see the logic of the ending without guessing it. . . .  I give the novel five stars.

An exceptional creator of setting, McAlexander invites the reader to share the beauty of wildflowers along the Oconee River, the exciting atmosphere of a University football game, and the terror of living through a tornado.

Both [of the young men involved with Sandy] carry secrets that entangle them, and their rivalry builds as the novel moves to its thrilling climax. . . . Easy to read and hard to put down, Shadows explores love, sexuality, family, divorce and reconciliation, nature, and the dark worlds of drugs and secrets.

“Sandy—I need to tell you something about him.”
“I don’t want to hear it. You’d better take me home.”
Bill abruptly turned around in a parking lot he was passing and headed back toward her house. His expression was grim, almost angry. “I’d be better for you, Sandy. Your mother thinks so, too.”
Anger replaced her anxiety. “How do you know what my mother thinks? I hope you and she didn’t discuss this!”
“Just a little, last night before you came downstairs. She didn’t say much, but I could tell how she felt.” He pulled up in front of her house. "We both worry about you with Jeff. It’s not just that we think this won’t last…”
“Why else should you worry?”
Bill hesitated. “For one thing, he has a temper. He may physically hurt you. Remember how he was even as a kid.”
Her anger notched up higher. He was sounding just like her mother, expressing unfounded, outdated fears. “It was years ago that he got in those fights. He’s not like that now. I’m sorry, Bill, but I think it would be better if you and I don’t see each other for a while.” She got out of the car and slammed the door.
Bill started to pull away, then stopped, opened the window, and called out to her. “Just remember, if you ever need me, I’ll be here.”